A Shared Love for Literature Creates an Intergenerational Friendship 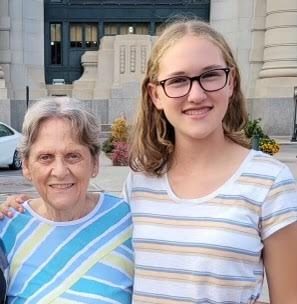 To Ella Tackett, family and literature are valued above all else. When she discovered her grandmother’s past in authorship, those two passions were united.

In 2005, Ella’s grandmother, Marci Holland, wrote the intimate coming-of-age novel, The Birth Day Letter, based on her own childhood. In the novel, Holland recollects of her experience connecting with her own grandmother after they had been diagnosed with Alzheimer’s. Ella, an avid reader, expressed her enthusiasm for her grandmother’s work, “I read her book when I was about ten. We would just talk about it; I loved her book so much. We’ve bonded over writing,” Ella said.

Ella’s support for her grandmother was not confined to the conversations about the novel between the two of them, especially upon her grandmother’s donation of a copy of The Birth Day Letter to the library of the school that Ella had been attending at the time.

“I remember that she signed a copy to give to the Double Peak School Library, and wrote ‘to Double Peak’ in the cover. Every time I was at the school library, I would pull it off the shelf and put it on the front desk… I was just so proud of her.”

Ella’s grandmother stands as an example to her that women are capable of achieving their dreams in the face of discrimination and hardship. “When she was growing up, she wanted to be a baseball announcer. That was not really an appropriate career choice back in the 60s for a woman, so she became a teacher instead. She always wanted to write a book, and after she retired she did… She inspired me, because even when she was seventy and had three grandkids, she still did what she wanted to do,” Ella said.

Today, The Birth Day Letter has even more significance to Ella. According to the Alzheimer’s association, in 2021, one in nine Americans over 65 had Alzheimer’s dementia. Tragically, Ella’s grandmother was one of those individuals. After her grandmother was diagnosed with Alzheimer’s, Ella and her family members have felt the devastation that accompanies having a loved one facing Alzheimer’s, just as her grandmother wrote about having done herself as a teenager. “I think it has a deeper meaning now, I can really connect with the book more and with her more through it. It honestly has really helped me with our relationship. I can see her story in her eyes, which is a really interesting perspective and something that a lot of kids can’t do.” Ella said.